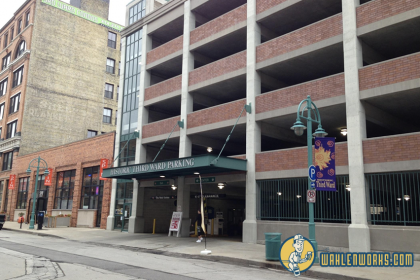 Unless you live in the Historic Third Ward, when you visit you’ll need a place to park your car. It’s not the first thing you’re likely to think about — and you probably won’t — unless something unpleasant catches your attention.

It’s our job to make sure that doesn’t happen in the parking facilities and on the sidewalks we maintain. In the Third Ward, you’re surrounded by beautiful historic structures that have been reimagined for the 21st century. We love the stories of these buildings and thoroughly enjoy our part in preserving their facilities. Let us tell you about some of the properties we serve.

In September 1922, a small announcement appeared at the bottom page 93 in “The Underwear & Hosiery Review”. It said, “The Phoenix Hosiery Co., of Milwaukee, will start work soon on a new addition at Buffalo and Milwaukee Streets to cost $600,000. The building will be eight stories high and is expected to be completed about the first of the year.”

Nearly 100 years later, the P.H. Dye House is still the Third Ward’s tallest building, but has recently been completely renovated as an office and retail space that marries the industrial design of its past with the creative vision of its future.

The historic landmark is called the “Dye House” because it’s the factory where Phoenix Hosiery employees dyed the high-end silk stockings that were becoming so popular during the “Jazz Age”. The concrete building, designed by Lockwood and Greene Co,” was listed on the National Register of Historic Buildings in 1984.

In fact, Milwaukee’s Third Ward was once well-known for its factories. Roughly 18 of the 70 buildings in the National Register of Historic Places were used for manufacturing at one time or another. Today, these beautiful and well preserved buildings are home to luxury apartments, live-work spaces, restaurants, and office spaces for a variety of eclectic tenants.

Several of those factories belonged to Phoenix Hosiery, formerly Phoenix Knitting Works. It was one of Milwaukee’s most prosperous companies in the early 20th century. In addition to the Dye House, the company eventually had six locations in Milwaukee and three in the Third Ward. The Phoenix Building, a 7-story brick structure located at 219 N. Milwaukee St., was known as building #4 when it was completed in 1917.

The Phoenix Building property record at the  Wisconsin Historical Society says, “The dye and wash area was in the basement, printing, stock and shipping on the first floor, packing on the second and knitting on the floors above…Since 1956 this building has been used by several firms for offices, warehouses and light manufacturing.”

The Phoenix building is currently home to ad agencies, law firms, investment companies, and the Historic Third Ward Association. It also boasts an amazing collection of early 20th century vintage ads for women’s hosiery as an homage to the building’s past.

The Marine Terminal Building has been occupied by a wide variety of tenants over the years, including Herb Brumder who manufactured his Porto-Power hydraulic “workshop on wheels” on the second floor in the 1930s. He may have been there for the “three freight elevators, the heavy load capacity of its floors, its fireproof construction and its location near downtown.”

The building was designed by Albert Hecht and completed in 1918. It was a sought after warehouse location because it allowed access to the lake with only one bridge opening. Today it houses 83 luxury riverfront condominiums with heated underground parking, access to all the Third Ward offers, and fantastic views.

To walk past the Mackie Building is to step back 140 years in time. It has a fascinating history as the first Chamber of Commerce in Milwaukee. The Exchange Room “contained the first trading pit ever constructed. The pit was designed by the Chamber’s secretary, William J. Langston, and was widely copied by other grain exchanges.” After the Chamber moved out in the 1930s, other tenants moved in and the interior was renovated to keep up with the times. In 1981, the Landmarks Commission noted that “the exterior of the building is essentially as it was in 1880.” (source)

The building was added to the National Register of Historic Places in 1973 and is currently home to the Mackie Flats Apartments. The apartments take up the top three floors replacing the 100-year old office buildings that used to be there. Residents are within walking distance to all the attractions of the Third Ward. As they step outside, they can glance up at the renovated clock tower where it still says “Chamber of Commerce”, take a few steps to catch the streetcar, or stroll leisurely to their destination.

Visitors come to the Historic Third Ward to work and to play. The 10-square block area is home to more than 500 businesses and people come year round for dining, nightlife, shopping, salons, healthcare, galleries, the performing arts, and events. The Henry W. Maier Festival Park is there, along with the Italian Community Center, the Milwaukee Public Market, and the Third Ward Riverwalk.

The historic warehouse vibe is still alive and well, only now instead of needing room for wagons, visitors need places to put their cars. They can park in the Historic Third Ward parking structures on Milwaukee Street and Chicago Street.

When you visit the Third Ward, you probably don’t think much about the parking or sidewalks and we think that’s a great thing. We keep the parking facilities and sometimes the sidewalks of these historic buildings immaculate so that visitors and residents are only aware of the beauty and history of their surroundings. We love that job! 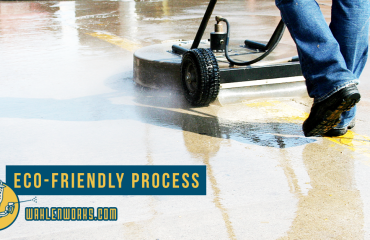 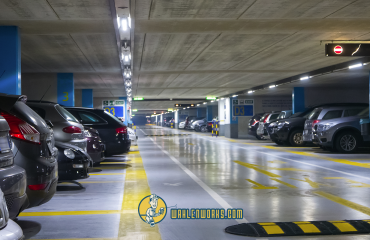