Wisconsin has nearly perfect weather in early fall. Daytime temps in the 70s mean that just about every activity is comfortable. Temperatures in the 50s at night make for great sleeping weather. These gorgeous conditions can almost convince us that it will last forever. But we know it won’t.  Whether or not there’s another polar vortex in our future this winter, we know it will get cold. There will be snow and ice. There will be salt and sand. It will be messy. It’s time to think about parking lot maintenance.
As difficult as it is to think about, now is the time to prepare for winter. To make it easier for you, we’ve developed this handy checklist of everything you need to address to protect your parking facility before Wisconsin does what Wisconsin does.

The Autumn list for parking lot maintenance includes:
If you fail to winterize, your costs could easily shift from preventative (which is less expensive) to reparative (which is more expensive).
Start today! The average first frost in southeastern Wisconsin happens in October. That’s now and it means you want to schedule your service within the next few weeks. Before we perform any job for our Milwaukee clientele we map out a detailed plan to ensure that the work is done efficiently and expertly. Call us today at (414) 774-0884 to schedule your winterizing services.
Read more
No Comments

What Is Your Pavement Marking Saying? 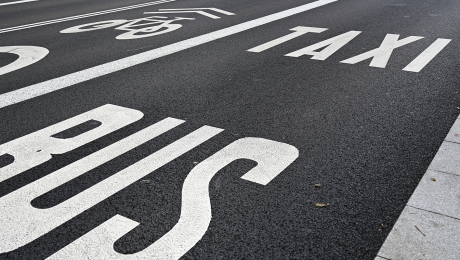 Do you realize that your pavement marking can talk? Well maybe not talk exactly, but it certainly can communicate. In fact, that is its primary function. It’s like the project manager on your team or the traffic officer at Miller Park. Fresh, high quality pavement marking keeps vehicle and pedestrian traffic organized and moving smoothly which keeps everyone safer and happier.

What Is The Purpose of Marking?

Pavement marking is so ubiquitous and so expected that most people rarely give it a thought — until it isn’t visible when they need it. If you have ever been caught in a blinding thunderstorm or found yourself with seconds to decide if you need to merge or stay put, you know that proper road surface marking is the difference between fear and confidence.

The Manual on Uniform Traffic Control Devices (MUTCD) published by the U.S. Department of Transportation says, “Pavement markings are used to convey messages to roadway users. They indicate which part of the road to use, provide information about conditions ahead, and indicate where passing is allowed.” Symbols, such as for bicycles, tell you how you are permitted to use the lanes. They can also warn you of areas where you might want to exercise caution, such as at railroad crossings.

In parking structures and on other private property, clear easy-to-understand striping tells drivers where to go and what to do. A prominent crosswalk tells pedestrians that it is safe to walk there. Signs and symbols tell both foot and vehicle traffic where they are permitted to move, wait, and park. This is good for customers and business, but it also complies with the law, specifically in regard to the Americans with Disabilities Act (ADA). When creating handicapped parking areas, a combination of clearly marked stalls and proper signage sends a warm welcome message to all visitors.

When you enter a ramp or other parking structure, you are confronted with markings that are more complex than the standard yellow and white of the highways. Pavement marking works in conjunction with signs and (sometimes) traffic signals to direct traffic through a parking area and a yellow line (either solid or broken) is still used to indicate two-way traffic. However, you will also see stop lines, crosswalks, painted curbs, and symbol markings.

In California, they tested a new 6-inch wide, highly reflective road striping in 2017. The $136 million project was implemented on I-80 in the capital city of Sacramento. The test was so successful that Caltrans decided to re-stripe 50,000-plus lane miles of state highway system in the next decade.

Their reasoning is that markings “must be capable of conveying information during inclement weather and evening hours when there may be little to no illumination from overhead lighting. The 6-in.-wide striping provides a valuable continuous stream of information about the roadway that signs or signals cannot supply. They alert drivers to changes in the roadway and help them maintain their position inside of the lane without requiring the driver to take their eyes off the road.”

While pavement marking obviously can’t talk, it does tell us things and communicates valuable information that we literally cannot live without. If your striping is faded or inefficient, give us a call. We’ll have it “talking” to you again in no time. 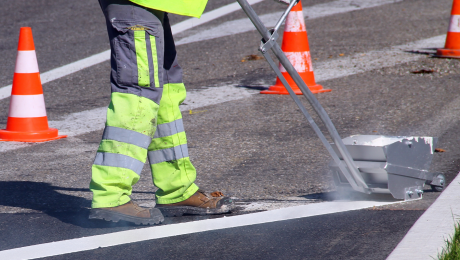 If you’re a Milwaukee commercial property owner, a parking lot with freshly painted, clearly marked lines is almost as good as the smell of a brand new automobile. But that freshly painted look is hard to remember after a long winter of snow and snowplows, when your pavement striping is as faded as a ten-year old car. In addition to the pleasure of a new-looking lot, your customers’ convenience and safety depend on the clarity and visibility that a professionally striped parking lot provides.

So how do you get that “new car feel” for your old parking lot?

First, you want to ask yourself a few questions. “Does the traffic flow make sense to my visitors?” “Is the space used as efficiently as it could be? Am I compliant with all applicable regulations?” “Do I have enough upright signage for stopping, yielding, and pedestrian crossing?” “Can pedestrian walkways be clearly seen?” If the answer to any of the above questions is no, it’s time to restore your parking lot pavement to it’s original showroom look.

Fresh pavement striping will provide you with clearly marked parking stalls and bright, durable marking. This means professional quality, crisp lines measured precisely and painted to the required thickness. It includes pedestrian walking spaces, directional driving arrows, entrance and exit signs, handicapped parking spaces, loading and unloading areas, and unmistakable fire lane areas. In some instances, such as handicapped spaces and fire lanes, there must also be both marking on the pavement and on upright signs.

Whether it is brand new asphalt, freshly seal coated concrete, or existing lines that need to be re-painted, we do it all. We have the equipment and personnel to complete the work in your off hours so we do not interrupt your operations. Restoring your Milwaukee parking lot to it’s original shine has never been easier.

For a complete parking lot remodel, ask about including our power washing and concrete sealing services along with your pavement striping job. You’ll be proud of your property once again. 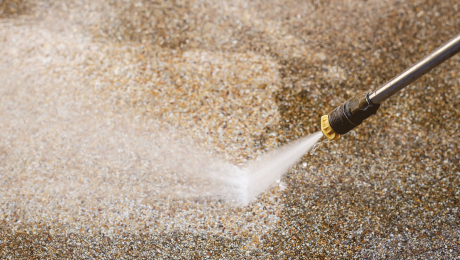 When a customer approaches your business, their first stop is often your parking lot or garage and the outside structure of your building. Like it or not, appearances matter. When public and private spaces aren’t clean, visitors can get the impression that a place is neglected. Seeing that the outside of a business is neglected may give visitors the impression that the owner neglects other aspects of their business as well. A neglected space can even be interpreted as an unsafe space, and this isn’t a completely baseless assumption by visitors. A recent study done in England found that poor levels of cleanliness are often associated with increases in other low-level crime and social disorder. As a business owner, you don’t want these subconscious thoughts to run through the minds of your customers. At Wahlen Works, we specialize in helping businesses give the best first impression to their customers.

From the moment that a customer drives into your parking lot or structure, they should be able to easily determine where to park. Keeping up on your pavement marking and parking lot striping can help reduce the tiny amount of stress drivers may feel when looking for a parking spot.

When customers step out of their car, you want to ensure that they’re not stepping on dirty or stained pavement. Again uncleanliness can be associated with neglect in the consumer’s mind. So you want to show that you take care of your business, like you’ll take care of whatever need they may have. Regularly pressure washing your parking facility is one small way to show that you care.

Lastly, maintenance is everything. If you have a concrete structure or concrete pavement, concrete sealing is one way to help ensure the pavement lasts and your pressure washing jobs last longer, as a quality sealant can help prevent staining. When you own a business, it’s important to think about think about the customer’s experience from the moment they pull up to the moment they leave. If you need help making sure that first impression is a great one, contact us today!